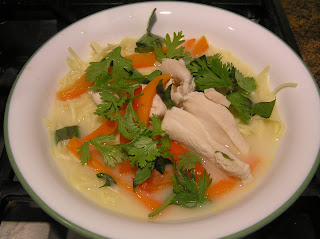 Laksa is a Malaysian soup made with coconut milk, vegetables, assorted herbs and sometimes chicken and/or fish.  If you stopped reading after coconut because you don't like it,  WAIT!!!!!!!!!  The taste of coconut is mild, more like a background flavor, especially if you use the light stuff.  YoungerSon, who hates coconut, had a second bowl even  after I confessed about using the stuff.  Laksa can be spicy, so if you're the sort who thinks mild taco sauce burns, then cut the amount of chili paste in half.

I did a fast check on The Google, and discovered there are as many recipes for laksa as there are for chicken soup.   Speaking of which, this version uses chicken broth and chicken breasts, but a vegan version is easily made by substituting vegetable broth and omitting the dead animal.

Normally, laksa has an unattractive orange oil slick around the circumference of the bowl.  My version didn't really have any, but that could simply be due to my substituting a teaspoon of sriracha sauce for the chili paste I thought was in the pantry.  Next time I'll make it the "correct" way and let you know.

If you like, add additional veggies such as chopped zucchini or snow peas.  Or even some peas.  Ooh, peas!  That sounds yummy!

Boil the egg noodles according to package directions.  Drain, rinse with a little cold water to (help) prevent sticking, and set aside.

Meanwhile, in a 4 quart or larger saucepan over a high flame, add the coconut milk, chicken broth, 1 cup water and Sambal Oelek.  Cover and bring to up to a boil.

Uncover and add the carrots and chicken.  Bring to a simmer, reduce heat to medium-low and continue to simmer uncovered for 15 minutes or until chicken is no longer pink.

Add red pepper and cook for another minute or two. 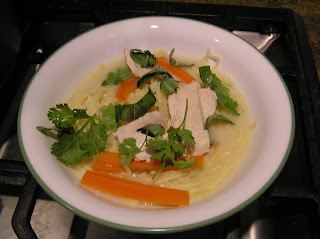 Divide noodles among 4 bowls.  Top with bean sprout, if desired.  Ladle soup over both, and top with basil and cilantro.
chicken soup vegan