on December 01, 2011
Remember the leftover squash from my Butternut Squash with Mango soup?  Last night I was in the mood for more of the same, but inconveniently didn't have a mango handy.  But I did have a pile of sweet potatoes taking up valuable space in my fridge.  And I do like sweet potato soup.  So I thought instead of attempting a closer recreation the sweet potato soup from Tierra Sur restaurant at Hertzog Winery a month-ish ago.

Like Tierra Sur,  the sweet potato matchsticks were cooked only a few minutes to retain their shape, then have then sit atop the other garnishes.  Unlike Tierra Sur,I didn't think to cook the matchsticks separately from the soup, then add later as garnish.  They migrated to the bottom of the bowls to keep the raisins company (by the way, why is it okay to "plate" dinner but not "bowl" soup?  On second thought, that might be a bit messy ... but I digress.)

I added cinnamon along with the cumin and coriander to bring it closer to the restaurant's version.  Cinnamon and sweet potato go together like ... sweet potato casserole.  But without the marshmallow topping.

After (finally!) remembering the raisins,  I was about to take photos of the result.  However, my heart sank along with the raisins and sweet potato matchsticks  ...  my soup looked exactly like the version made last time :(. 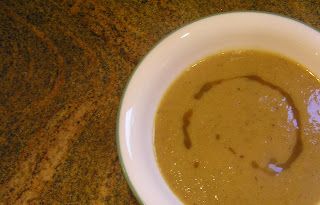 Coarsely chop onion. Use a veggie peeler to strip sweet potato.  Cut off about a 2 inch section; cut into matchsticks.  Cube remaining sweet potato; set everything aside.

Heat a 3- or 4-quart saucepot over medium-high heat.  When hot, add olive oil, wait 10 seconds, then, drop in ginger, cumin, coriander and cinnamon.   Stir constantly for around 10-15 seconds or until fragrant.

Add chopped onion and saute for about 5 minutes, stirring occasionally, until the edges start to brown.

Stir in butternut squash and sweet potato cubes.  Saute, stirring occasionally for about another 5 minutes.

Stir in coconut milk, broth and brown sugar. Bring just to a boil, then cover and reduce heat to a bare simmer,  stirring occasionally for about 20 minutes, until sweet potato is easily pierced with a fork.

Remove pot from heat, then process soup with an immersion blender until smooth.  Or let soup cool slightly, then carefully use a ladle to transfer soup to a food processor or blender; blend until smooth, then return to pot.

cadastru si intabulare said…
I like this recipe a lot, it is one of my favourites now after i`ve tried it yesterday and it was very good, thanks for sharing and also thanks for your good explanations.
December 2, 2011 at 1:51 AM

Unknown said…
Look at the color of that soup! It's amazing. Personally, I'm glad you were out of mango because I think I like this one better. It's gorgeous.
December 2, 2011 at 8:46 AM