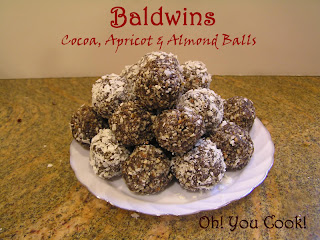 For those of you who don't know me personally, I am very calendarly-challenged.  I can look at a calendar on a Wednesday, for example, and think it's Thursday.  Of a different week.    I also have a bit of time-challenge as well.  If the clock says 2:30, I go about as if it were 3:30.  Or the other way around.  Even with a digital clock.   But it does have its advantage.  Since I am permanently in EDT (Eastern Dena Time), I'm not affected much by daylight savings or traveling to different time zones.  Thankfully, the Secret Recipe Club reveal time was pushed back to midnight, allowing me a better chance of linking up with the other SRC participants in a timely manner (see the end of this post for the link ups).  Otherwise my assigned blogger would wonder if she were "orphaned," which would lead to my receiving an email again from the SRC group leader wondering where my post was.   An email I wouldn't get to read because I'd usually be at work by then.

My assigned and nowhere-near-orphaned blog this month is food. baby. life by Susan.  Susan lives in Australia and describes herself as a "happily married business owner, wannabe domestic goddess and mum of 2 beautiful boys."  She has been blogging for 4 years, and besides sharing many of her own  recipes, participated in Tuesdays with Dorie-Baking with Julia.  As a result, she has oodles upon oodles of amazing recipes from which to choose.

I was prepared to prepare her Chocolate Self-Saucing Pudding.  It looked like such a delicious way to use up what's left of my flour, a Passover no-no but really any excuse to make a chocolate dessert.  But with Passover starting tonight, it seemed more appropriate to find a recipe that could be enjoyed during this 8-day holiday rather than after.  So I dug further to find these beauties:  Cocoa, Cranberry and Almond Balls. 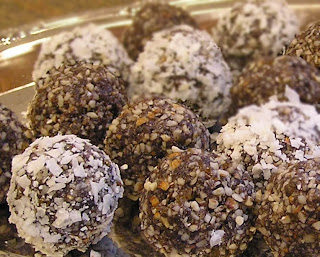 These balls don't have any flour cooties (gluten-free as a bonus), so they needed only a tweak to become Passover-friendly.  They are an easy no-bake snack, making them perfect summer beach balls as well as (if the local weather person's prediction is correct for tonight) snow balls.  In addition, coconut covered cake and coconut-filled chocolate eggs are two Easter treats, so the coconut-covered balls would fit right in.

Kosher for Passover dried cranberries exist, just not at my local Try-n-Save, so I subbed with dried apricots.  Raisins or dates can probably work as well.  Speaking of dates,  I could have used date syrup to replace the original rice malt syrup (rice is also a Passover no-no for many as well), but I  didn't feel like buying a whole jar just for one tablespoon.  I did have to use a lot more of the honey to get the mixture to hold together; rice malt syrup must have a higher viscosity.  Honey has flavor that rice malt might not, but even if honey is not your honey, try some anyway.


Since I really prefer dried cranberries, I assumed the results were going to be disappointing.  But these Baldwins really rock!  Sweet, but not cloying.  I brought some to work last week, and they all disappeared before the evening crew rolled in.  My suggestion if you plan to travel with these babies is to separate the coconut-coated from the plain ones.  I bagged all of them together, and by the time I got to work they all magically became coconut-coated.

Oh, in case you are wondering why I renamed the recipe.  One co-worker said she first thought they were donut holes, and was pleasantly surprised to find out they were not.  But upon hearing the original and more descriptive name she thought they should be called something snappier.  Another co-worker helpfully suggested  Schweddy Balls.  Um ... no.  But a third suggested Baldwins.  Which stuck ... better than the coconut.

Zissen Pesach!  Have a very sweet, happy and healthy Passover to you and your family! 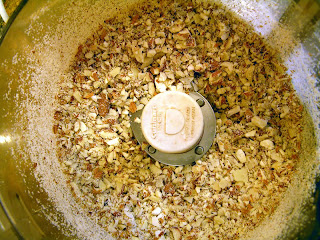 Place the almonds in the bowl of your food processor.  Process for 10 seconds or until chopped.

Add the apricots, cocoa and honey.   Pulse until mixture clumps up, adding more honey, a teaspoon at a time, if necessary. 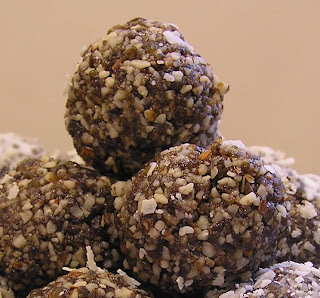 Wet hands in cold water and shake off excess.  Roll mixture into balls about an inch in diameter.  Repeat wetting hands as needed. 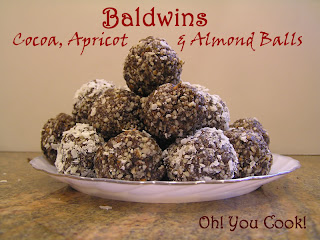 Roll in coconut if desired, and place on serving platter. If not serving within a day, store, tightly covered, in the fridge up to a week.

Disclaimer - because this recipe is part of an online cooking group, many of the linked recipes below might NOT be kosher.

Cindy said…
I had Susan's blog recently--it is fun! These look delicious, I like all the ingredients so they must be excellent.
Thanks for talking about what you eat for different religious holidays. I don't really understand Kosher so this is interesting to me.
March 25, 2013 at 11:23 AM

Susan @ My Wholefood Family Essentials said…
I'm so glad you enjoyed these. And I love the name change! Less descriptive but definitely snappier :-)
March 25, 2013 at 5:50 PM

FransFavs said…
These look scrumptious--wish I had one (or two or three) right now! Thanks for posting this great SRC pick.
March 25, 2013 at 9:38 PM

Kirstin said…
Yummy! I am pinning these because I'm always looking for new, healthy snack type things.
March 26, 2013 at 5:11 PM

Oh! You Cook! said…
I'm ashamed I didn't mention it myself ... just drop the cocoa and add red wine. Easier to portion out for Hillel sandwiches. Or serve on apricot halves (as you suggest on your own blog). Thanks!
March 29, 2013 at 11:22 AM

Erna said…
I love these! I prefer them with dates though, then you don't need any honey or other sweetening agents. And to get an even richer chocolate flavour try adding a little coconut oil. And when there are no nuts in the pantry rolled oats do the trick.
Also yummy is just plain apricot balls with a little lemon juice, makes a very fresh snack.
November 2, 2013 at 11:47 AM