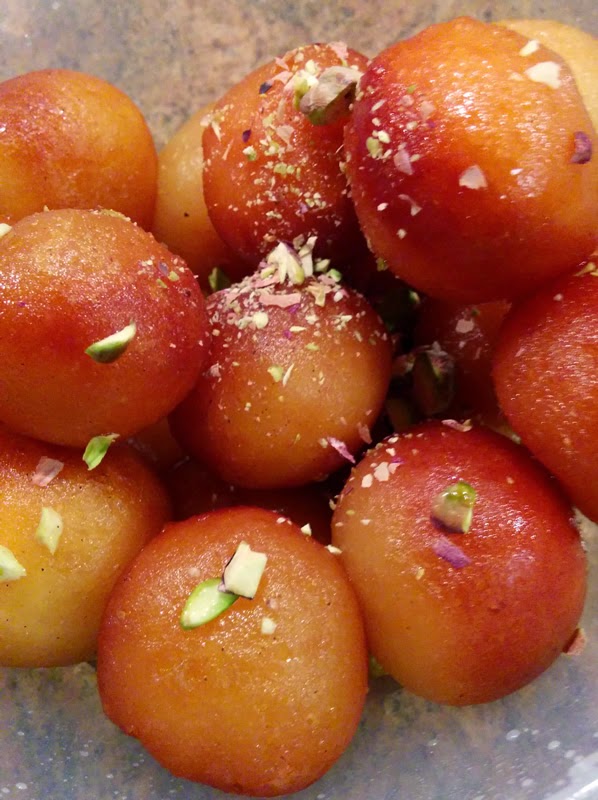 Chanukah is the festival of lights, the date based on the Hebrew calendar, usually falling near the end of the western calendar year.  This year it starts the evening of December 16th.  It is an 8-day holiday, the celebrating the victory over evil, and knowledge over darkness.  It is customary during Chanukah to light candles or oil lamps, distribute gifts and gather with family and friends. It is also celebrated by eating fried foods.  This year I wanted to make something else for Chanukah besides the American standard ol' tradtional latkes, those savory shredded potato pancakes or the Israeli sufganiyot, those round jelly donuts.   Then I remembered last week's ESL graduation. 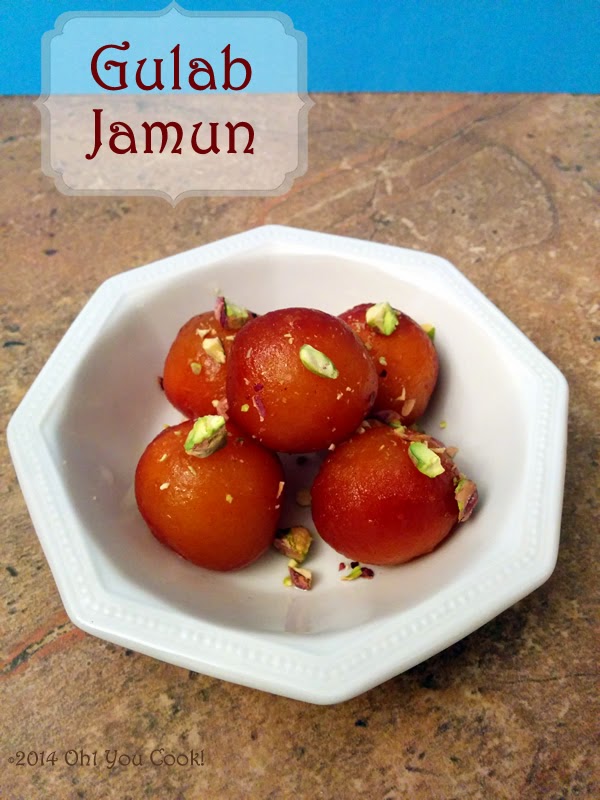 As part of the ESL Graduation celebration, everyone brings a dish representing their home country or ethnicity, including the tutors and moi (I brought macaroons).  One of the students brought gulab jamun, a festive Indian dessert.  Her gulab jamun was as delicious as those served at Indian restaurants. 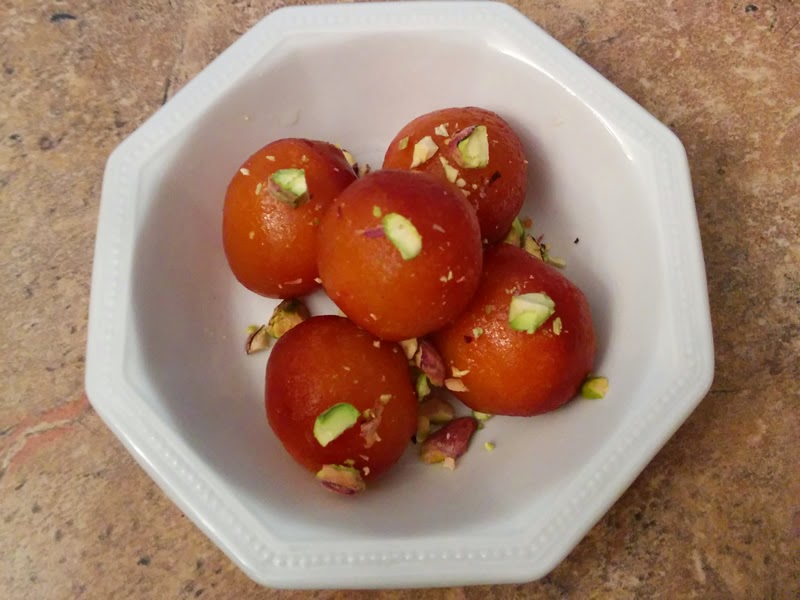 Gulab Jamun are small milk-based balls of soft dough, deep fried, then soaked in and drizzled with fragrant sugar syrup.  It is served during Diwali, the Hindu festival of lights, celebrating the victory of light over dark, good over evil and knowledge over darkness.  It is customary during Diwali to light oil lamps, distribute sweets and gather with family and friends.  Diwali was celebrated this year back in October, at the start of the new year on the Hindu calendar.

Both holidays share so many similarities that I just had to make this dessert! 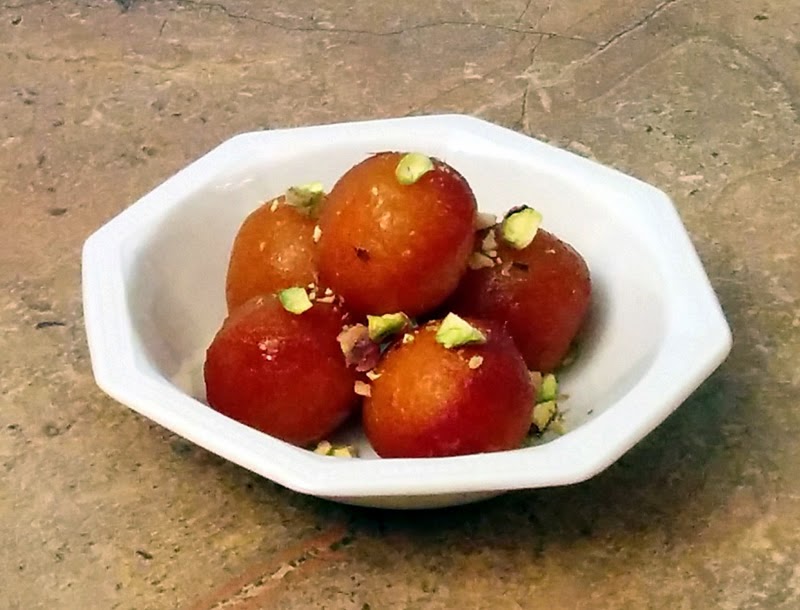 Gulab jamun does not have a lot of ingredients, but the steps to make them can be tricky.  Stir the liquid milk into the dry ingredients just enough to incorporate (to avoid forming gluten, which toughens the balls).  The mixture will initially seem too loose and sticky, but will firm up upon standing, although still be a little sticky.  Keeping your hands moist with cold water will help control the stickiness without adding too much moisture which can make the oil splatter.

The oil has to be heated to around 230F.   If the  temperature is too hot, the outsides will brown too fast while the inside will not cook through, becoming hard instead of pillowy soft.  Do not crowd the gulab jamun or they will glue themselves together while frying.  Don't walk away during the fry time; they must be turned frequently in order to evenly brown. 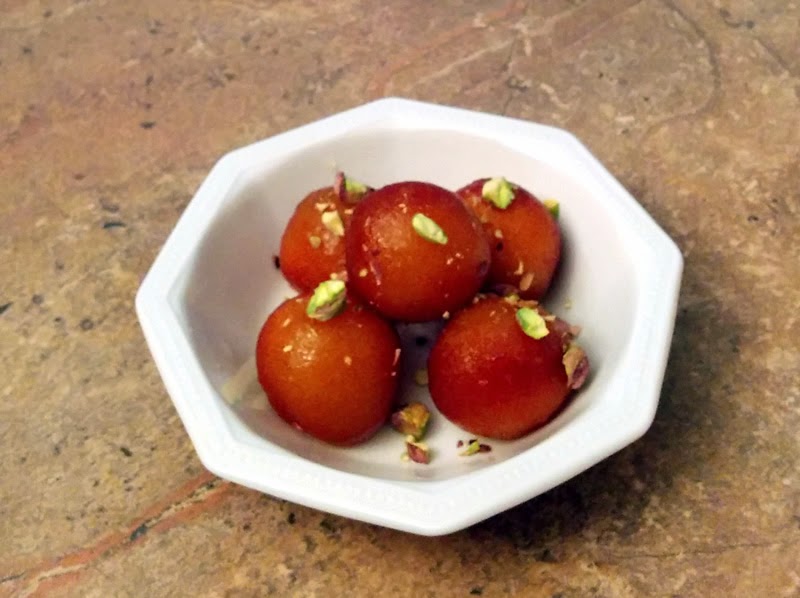 If you follow the directions, you will be rewarded with a wonderfully decadent dessert that will wow your family and friends.  Despite deep frying, gulab jamun is not greasy at all.  Which is more than anyone can say about latkes.


In a 1-quart saucepan pan add water and sugar. Bring to a boil over medium-high heat, stirring constantly until sugar has dissolved. When the mixture starts to boil, stir in 1/4 teaspoon of the cardamom, the bring completely to a boil.  Continue to boil for 2 minutes.  Remove from heat and carefully pour into a medium-sized bowl; set aside to cool. 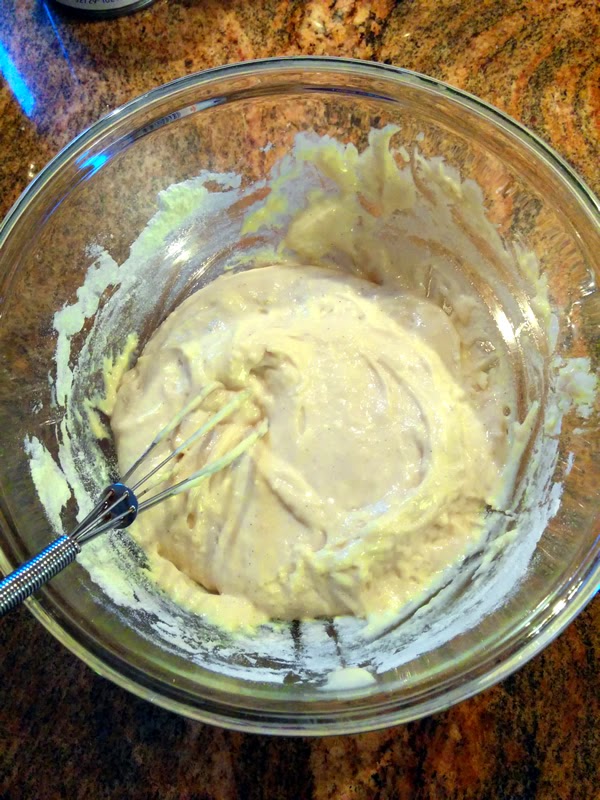 In another medium-size bowl mix together the powdered milk, flour, baking soda and remaining cardamom.  Stir in evaporated milk just long enough to incorporate. The mixture will be loose, but not liquidy.  Let stand for 10-15 minutes to allow dough to firm up.


Wet hands with cold water, shake off excess, then roll dough into small round dough balls barely 1-inch in diameter.   Don't worry if the dough balls are not perfectly shaped because as they fry up they will expand and become adorably round and smooth.

Pour oil into a 2-quart saucepan to a depth of at least 1 inch. Place over medium flame and heat to around 230F.  If you don't have a candy thermometer, the oil will be at the right temperature if a dough ball sizzles gently and sinks when added to the oil, then about 30 seconds to float to the surface.  If it rises faster, the oil is too hot; either add more oil or take saucepan off flame and let cool down. 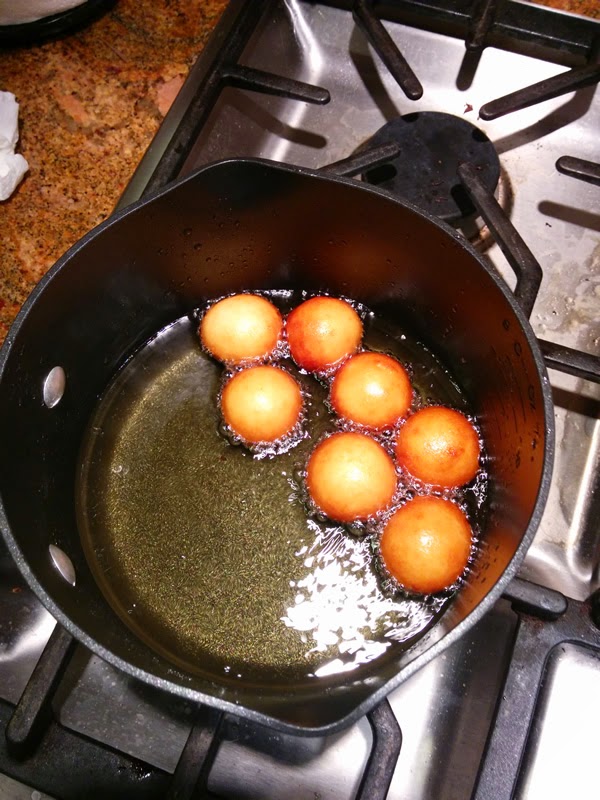 Reduce heat to low to keep temperature steady.  Cook remaining dough balls, 4 to 8 at a time (depending upon the width of you pan and size of the balls), allowing enough space between them to double in size without touching.  Fry about 7-10 minutes or until golden brown, turning balls every so often so that they brown evenly.


Remove with a slotted spoon, allowing oil to drip back into the saucepan.  Transfer gulab jamun to the sugar syrup.   Let cool in the syrup for at least 20 minutes, up to several hours. 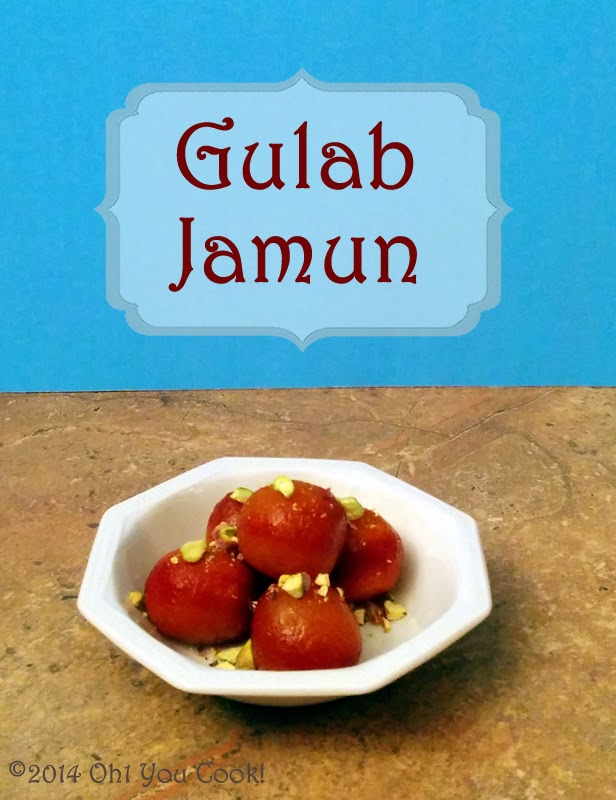 Serve warm or chilled drizzled with their syrup.  Garnish with toasted slivered almonds or chopped pistachios.   Keeps up to a few days, covered in the fridge.   Reheat over gentle heat in a saucepan (do not let syrup boil), or nuke for 20 seconds per 3-4 gulab jamun.

Asiya @ Chocolate & Chillies said…
LOVE Gulab Jamun and yours look perfect! I've never made them myself...I am horrible at deep frying things but growing up, my mother made them often. Your post was very informative...I didn't know of the similarities between Chanukah and Diwali!
December 17, 2014 at 10:45 PM