My hubby's birthday is tomorrow, but his parents wanted to come down today to celebrate.  No problem. Since they like BBQ, I tossed a chicken, along with a package of steaks (sans packaging) on the barbie.   Older Son, who as you have heard many times before is spending the year in Israel, called to wish his dad a happy birthday, and mentioned he was just about to head out to a BBQ as well to celebrate Lag B'Omer.  Lag B'Omer is a happy holiday, usually celebrated with picnics, bonfires or BBQs (or in my case, a bonfire in the BBQ when the chicken caught fire).  There are several explanations as to the origin of Lag B'Omer, a few that fall in with the usual "they tried to kill us, we won, let's eat" so I'll leave it at that.

Besides the dead animals, I served salad (out of a bag, sue me), potato salad, cole slaw and my famous parve chocolate cake.  Today's post is about the cole slaw.

I found the original recipe at Top Secret Recipes several years ago.  Don't bother to visit that site now because the simpler version I use has been replaced by several more complex ones.

If you decide that slicing a head of cabbage is way too much work, buy 2 bags o'slaw and chop up the shreds some more to duplicate my version.  Or don't.  'Sup to you.

The original recipe called for Fat-Free Miracle Whip.  But the last time I read its label it contained dairy, so I changed the recipe to the more fat-laden parve-friendly regular stuff.

You can make this a day ahead.  The slaw will soften a bit, but no one will mind a bit.

Since there were only 5 people at the patio table this afternoon, I made half a batch and still had leftovers, so don't judge the quantity of the recipe by the pictures.

In a small bowl, whisk together the Miracle Whip and sugar.  Set aside a few minutes to let the sugar dissolve (otherwise the dressing will be gritty).

Cut the cabbage into large chunks (in order to avoid the more solid core, which grows up through the head).  Discard core.

I used only 3 baby carrots today, but you'll need more for a full recipe or maybe one small whole carrot.  I sliced them lengthwise, then lined them up and sliced them again. Then chopped them up a few times to get really tiny pieces.  Place slaw and carrots into a large serving bowl.

Pour dressing on top, and toss to coat well. 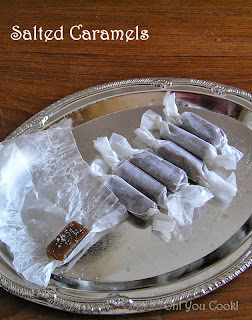 I'd Walk a Mile for a ... Salted Caramel

I have been making caramel as gifts for at least 15 years.  The tattered and faded recipe doesn't have the original source, but I have been tweaking it over the years so at this point I can legitimately claim it to be my own.  This most recent tweak is of the salted variety.  Silly as it sounds, the addition of a mere teaspoon of kosher salt, not to mention the extra pinch for garnish,  offsets yet enhances the candy's sweetness.  Speaking of garnish, if you have one of those expensive flaked type of salt lying around, use it for a real fancy-schmancy flourish.  Demi-tasse saucer.  Makes candy look HUGE! Unlike those store-bought plastic-wrapped cloying squares that cement your teeth together then yanks out your fillings as you pry your jaws open, these caramels lusciously melt in your mouth, leaving a smile along with a longing for more. As you stir the bubbling mixture, don't be fooled by what seems like a stingy amount in the sauc