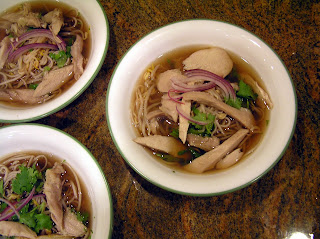 Happy new secular year!  If you partied this past weekend, hope it was fun. To celebrate a little on the late side, I am participating in a different kind of party ...

... a Crazy Cooking Challenge party!.  This one is a little different from that last online challenge I was in.  Instead of having to make any dish from a blog chosen for me, participants must make a specific type of dish, but from any blog ... except from their own, of course.

And the Challenge recipe this month is:  chicken-noodle soup!  Gee, sounds like an easy no-brainer, right? After all, every Sarah, Rebecca, Leah and Rachel has a blog with recipes for Jewish penicillin.  And except for quantities and a veggie or spice, every recipe is pretty much the same.

But I didn't want to do the same  ... I wanted to do something different.  So I went to look for different.  And found it at  Stephen Cooks, a blog dedicated to healthy cooking for diabetics (check out his site, he takes awesome photos!).  But you definitely do not have to be diabetic to enjoy his recipes (or his photos).   Such as his version of Pho Ga, a chicken noodle soup of the Vietnamese persuasion.

I did tweak the recipe here and there. Stephen's version uses fish sauce.  I haven't been able to find a kosher version in my area, so I used soy sauce instead.  I didn't have whole cloves or star anise in my spice drawer. Ground cloves and five-spice powder subbed quite adequately AND saved me a step ... not a bad trade-off with only a relatively minor taste reduction.  In case I haven't mentioned it before, five-spice powder sounds exotic, but is a combination of ground star anise and several other spices (depending upon brand).  It is used in Oriental cooking and is usually found in the baking/spice section of your favorite larger supermarket.

For this recipe, I recommend using low-sodium broth because canned broth usually contains more than a day's supply of NaCl.  Taste before serving, and only then add a bit more soy sauce if needed.  Bet you won't need or add.

Stephen's version also calls for poached chicken.  I used leftover roasted chicken, which (in my mind) made up for the lack of toasted spices.  Also, instead of rice sticks I used soba noodles, mostly because that's what was in my pantry.  Soba is a Japanese product made of buckwheat, which despite its name isn't a wheat.  But if you are gluten-intolerant, check the label because soba might still contain wheat flour (my package of soba is labeled as having 30% wheat flour).

Oh, one more change ... those ingredients I list as condiments?  I made the executive decision to toss it all into every bowl, then pour the soup on top.  In retrospect, it would probably have been more fun, and less faux, to let everyone customize their own soup.

The taste? WOWEE KAZOWEE!  Definitely a keeper.  It can be served as part of a meal, or as a meal in itself.  We all had a grand time slurping up the noodles as they spilled over our spoons and dripped onto the table (and some laps).  If you prefer less mess and more polite eatin', break the soba noodles in half before cooking.  Thank you, Stephen, for posting such a delicious recipe!

Chop off root ends of cilantro.  Separate leaves from stems. Set it all aside.

Preheat oven to 425F.  Quarter onion.  Place onions quarters and ginger on ungreased baking pan and place in oven. Roast until the veggies are nicely charred, about 30-40 minutes. Let cool down enough to handle, then remove and discard skins.  Quarter ginger. Set aside for a moment. 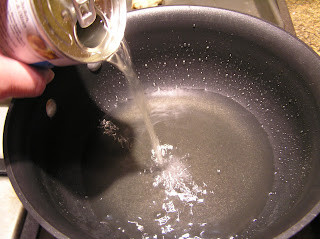 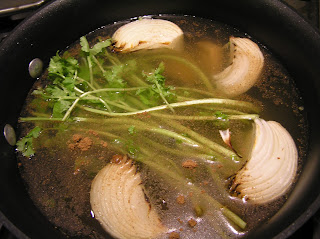 Drop in onion and ginger along with sugar, soy sauce, cloves, five-spice powder and cilantro stems. Stir a little, cover, then bring to a boil over medium or medium-high heat. Reduce heat to a simmer and cook, covered, about 25-30 minutes, stirring occasionally, until veggies soften.


Meanwhile, in a 2-quart saucepan cook soba noodles according to package directions.  Drain well and set aside.

When broth has finished cooking, strain through colander over large bowl. TIP ALERT!  Do this step in sink to contain wayward spills. Discard veggies.  They gave their lives for the soup. 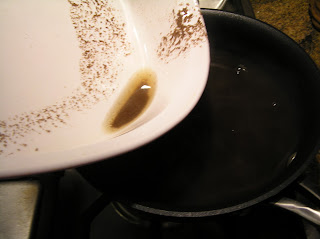 Slowly pour broth back into original saucepan. Watch carefully as you pour.  Much of the ground spices, never having really dissolved, should have settled on the bottom of the bowl.  Discard that little bit of sludge. 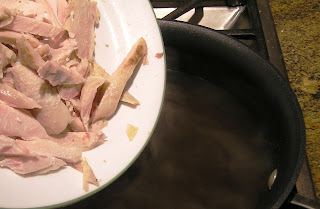 Divide noodles among 6 soup bowls. If you want to serve my way, top noodles evenly with bean sprouts, reserved cilantro leaves and red onion slices, and squeeze lime juice over each pile.  I left out the hoisin and sriracha sauces, mostly because I forgot. Then ladle chicken and broth over noodle mixture and serve. 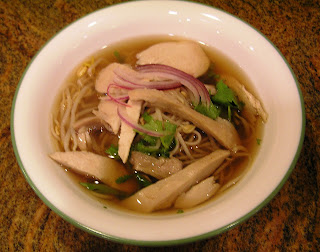 If you prefer the pho way, ladle chicken and broth over the noodles.  Set bean sprouts, reserved cilantro leaves and red onion slices along with hoisin and sriracha sauces on the side and let everyone doctor their soup as desired.

CHICKEN NOODLE SOUP Linky Party Code (January 7, 2012, 9am PST)
Disclaimer - because this recipe is part of an online cooking challenge, the linked recipes below might not be kosher.

Kristen said…
I like the faux way. It sounds like a delicious soup and you made it sound so easy, using things you had instead of searching for extra items at the grocery store.
January 7, 2012 at 1:44 PM

If you haven't already, I'd love for you to check out my Crazy Cooking Challenge entry: Thai Chicken Noodle Soup

Thanks for participating with us, this was my first time making Homemade Chicken Soup!
My recipe is #1 Creamy Chicken Noodle Soup - Come check it out if you haven't already!
January 9, 2012 at 5:36 PM

Chris said…
Hi Dena, this looks like a really good recipe for Vietnamese style chicken noodle soup. I'm going to have to try this one soon, it's just perfect for our wintry weather. Thanks for sharing. I have recently found your blog and am now following you, and will visit often. Please stop by my blog and perhaps you would like to follow me also. Have a wonderful day. Hugs, Chris
http://chelencarter-retiredandlovingit.blogspot.com/
January 19, 2012 at 11:39 PM