July 23, 2010
For some reason the search widget is a bit flaky, working intermittently.  It appears to be a blogger bug with some, but not all, blogs.  It worked on the old blog, but even lifting its code and plopping it onto my page doesn't work. Quite a number of bloggers have complained in the help forum, and I added my own 2 cents as well.

It's still up because I read somewhere that it might fix itself if left alone for a few days.  I'm a little hesitant, since a new potential viewer might try to use it and fail miserably, never coming back.  On the other hand, there are 5 fingers it doesn't cost anything to leave it, so I'll leave it.  But to hedge my bets, I temporarily upped the number of posts that show to the max.   Maybe it will make it easier for the search widget to ... you know ... actually search.

If the widget doesn't start to spontaneously work again in by Wednesday or so, it gets yanked and the number of posts that display will be reset back to 7.
Post a Comment
Continue reading >> 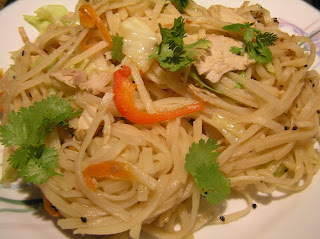 I really wanted to post this Thursday night, but, you know, sometimes other things get in the way.  For example, I thought OlderSon and GirlFriend would arrive from Boston, where coincidentally OlderSon was visiting said GirlFriend, and I got busy throwing together a cake so they would have a snack after such a long trip from Boston.  But by the time I cleaned up all the dishes and pots from dinner then worked on the cake (the recipe of which will be posted sometime this weekend, I'm through promising exact dates anymore) it was 11:45pm and I was too tired to come up with any witty/snarky remarks.

The two of them tip-toed in at around 3am.  See, there was this major traffic jam, followed by yet another traffic jam ...

Several of my loyal readers have asked me over the last couple of days about why certain steps are done in a particular way.  For example, do the veggies have to be cut into matchsticks, that sort of thing.  So, I will try an experiment and explain everything in gre…
Post a Comment
Continue reading >> 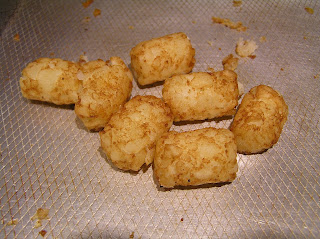 For dinner tonight, I was originally thinking of thinly slicing some steak, nicely charred on the outside and lightly pink inside (sliced across the grain, of course), whipping up some sauce (ponzu- or balsamic-based) and lovingly spoon it over the artfully arranged fanned-out meat slices on each plate alongside home-made mashed garlic potatoes.

Then YoungerSon said these magic words: "why bother slicing up the steak?"

So I quickly turned on the oven, pulled a bag of the Try-n-Save's brand of Tater-like Tots from the freezer, dumped half the bag on a baking sheet and shoved it into the oven. Hey!  Don't look at me in that tone of voice ...  I bet even Julia Child used some sort of convenience food once or twice in her life.  Sometimes the cook just needs a night off.

Tomorrow will be my usual masterpiece ;) I promise!

Grilled Steak with Tater-ish Tots
serves 4, with extra for seconds and/or to take to work for lunch the next day 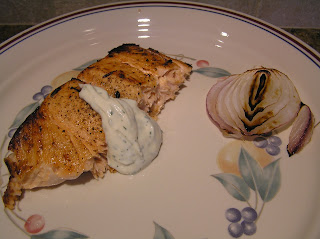 As opposed to many other herbs, dried dill doesn't have as much flavor as the fresh stuff.  So if you are using dried, you may (and by may I mean should) have to use a lot more to get the equivalent taste.

I really like the taste of dill.  It's great with fish, wonderful in chicken soup, and lovely in deviled eggs.  But the smell I can do without.  It reminds me of indoor paint.  Maybe dill is added to paint to kill an even worse smell.   So I recommend that you first chop the dill, THEN handle the fish in order to kill the dill smell on your hands.  THEN juice the limes to kill the fish smell on your hands.

If you need a parve dish, then  use vegan sour cream ins…
Post a Comment
Continue reading >>


Laksa is a Malaysian soup made with coconut milk, vegetables, assorted herbs and sometimes chicken and/or fish.  If you stopped reading after coconut because you don't like it,  WAIT!!!!!!!!!  The taste of coconut is mild, more like a background flavor, especially if you use the light stuff.  YoungerSon, who hates coconut, had a second bowl even  after I confessed about using the stuff.  Laksa can be spicy, so if you're the sort who thinks mild taco sauce burns, then cut the amount of chili paste in half.

I did a fast check on The Google, and discovered there are as many recipes for laksa as there are for chicken soup.   Speaking of which, this version uses chicken broth and chicken breasts, but a vegan version is easily made by substituting vegetable broth and omitting the dead animal.