Showing posts from September 2, 2012
Show all

Tiliapia Parmigiana Made with Leftovers - Easy 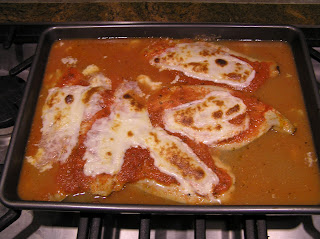 This is one of my more interesting recipes.  Not because it is the best fish Parmigiana up with which I ever came (dangling participles are a pet peeve of mine), but because it is made entirely from leftovers.  The marinara sauce was from a batch ladled over plain ol' pasta the other day.  The fish was the remains of Monday's lunch (youngerSon had already returned to college but from habit I'm still purchasing for a crowd).  The mozzarella was the remains of a too-large block previously and partially used for Lazy Lasagna.

According to that quality Italian food source, Wikipedia, Parmigiana is a dish of fried filling layered with tomato sauce and cheese.  Most people (and by most I mean me) call it by the Americanized name of [fill in the blank] Parmesan.  Which makes no sense when you think about it since traditionally Parmigiana calls for mozzarella cheese and optionally sprinkled with Parmesan cheese.  To be more confusing, the "parm" in "parmigiana"…
1 comment
Continue reading >>
More posts