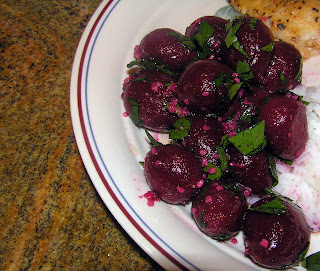 Especially canned beets.  They were just Icky!
Fast forward to adulthood, where I eventually discovered fire, which eventually led to discovering that vegetables, even canned vegetables, taste much better if served warm.

The New York Times posted a decent selection of Rosh HaShana recipes on its website last week.  One of the vegetable recipes included this very nice beet salad side-dish (and no, it's never explained why it's called Moroccan beets) made with roasted fresh beets.  But since he main course didn't require using an oven, I figured why not use beets of the canned persuasion and knock an hour off the prep time as well? 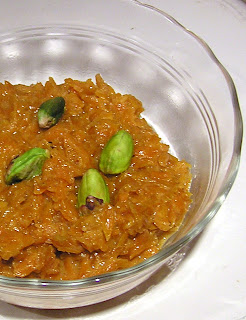 Quick!  What's the first thing you think of when you hear "carrot pudding?"  I usually picture a veggie side dish.  Well, how about "halva?" Bet you think of that slab of sweetened ground sesame paste

Surprise!  Halva (also spelled halvah or halwa) is a very international term,  referring to any somewhat dense, sweetened dessert.  According to Kitchen Daily, halva can be made with (depending upon the country) almost any type of grain, or as in this recipe, even no grain at all!

Gajar halva is an Indian carrot dessert that more resembles rice pudding.  If you own a food processor or a bag o'shreds, this recipe is a snap to throw together.  Even whipping out a vegetable peeler only uses up a couple minutes of your very valuable time.

The original recipe uses half-and-half.  I cut the fat and calories by using regular evaporated milk.  You can cut the fat/cals even more with skim evap.  To make a vegan version, substitute almond or rice milk, and use margarine…
Post a Comment
Continue reading >>
More posts