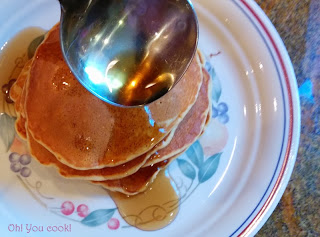 This morning I was feeling a bit generous, so I offered theHubby a choice of pancakes or waffles for breakfast instead of the usual nothing (not that I'm mean, but he usually waits until mid-morning for something to eat, long after I leave for work).  After he chose pancakes (Yay ... less work!) I went to the pantry and discovered that the pancake syrup I thought was hiding behind the oatmeal box was so good at hiding that I couldn't find it.  Not too worried, I assumed that the non-high-fructose corn syrup in the pantry, along with some other magical ingredient or two could sub for the real" high-fructose corn syrup-based imitation maple pancake syrup.

So after firing up the intertubes, I learned 3 new knowledgey thingies this morning:
1) absolutely none of the clone recipes (of the 5 I looked at) used corn syrup,
2) most add maple extract to approximate that comforting imitation flavor, and
2) it is so mad easy to make syrup that you can make enough to bathe in (I'…
Post a Comment
Continue reading >> 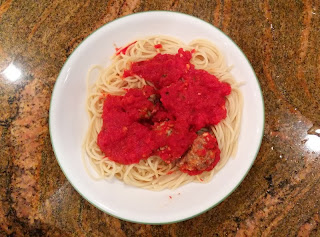 I want to take a break from all the candy recipes post a dinner suggestion instead ... meatballs!  Nothing says comfort food like spaghetti and meatballs.   Especially on a  yucky, kinda lukewarm and humid rainy day, such as today.  Not so hot that turning on the oven will roast the entire house, but not so cold that you need  a real substantial hot meal.  Today practically screams for spaghetti and meatballs.

Spaghetti is spaghetti.  Use regular spaghetti, or use thin spaghetti (spaghettini, in case you buy pretentious pasta).  I like thin spaghetti because it fools me into thinking that there's more pasta in the box.  Which there is, if you go by the number of strands in the package.


These meatballs are a little different than what I've made in the past.  This time the secret ingredient is ... ricotta!  Or, to be more accurate, parve (non-dairy) ricotta.  I previously used it to make a non-dairy cheesecake, and when I spotted a recipe for meatballs that uses real ricotta i…
Post a Comment
Continue reading >>
More posts