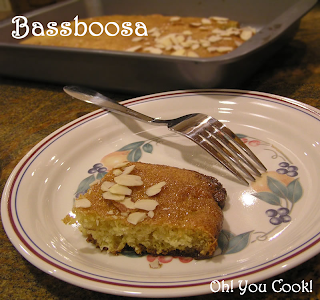 I made semolina cake the other day.  Semolina is a coarse flour made from durum wheat.  It is a hard grain and high in gluten.  Pasta, couscous, breads and porridge are usually made with semolina flour, but semolina can also be used to make desserts, such as pudding or the above mentioned semolina cake.

Because of the coarseness of semolina flour, it's taste and consistency can resemble a sweet cornbread.  Try to find a finely ground version of semolina to lessen the corn breadiness of the finished product.

The name of this cake depends upon where you eat it.  And because the name is transliterated, there are several different spellings for all of them.  This middle-eastern version is basbousa.  Or bassboosa, as Sabrina, Sara's mom, who provided me with an alternative version, calls it.


Sabrina has made bassboosa for years and years, enough times that she measures out the ingredients with a "large mug."