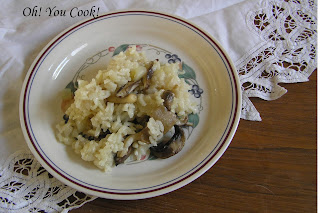 Hi!  Glad you decided to read this post, despite the name.  Most risottos require you to stand there and feed the broth, a little at a time, until all of it is completely added and absorbed.  This boring slow process is normally the key to a creamy risotto.


Until now.  I was going to add cheater or lazy to the title because, unlike a normal risotto, most of the broth is added at once.  Due to the long cooking time, the arborio rice magically swells and become creamy yet retaining the tiniest of bite that risotto is famous for.


I used wild mushrooms because a package of pre-sliced almost literally fell into my cart while I was slaloming through the crowded veggie section of the market.  The mushrooms were so fresh and cute that I decided to take them home and figure out what to do with them later.  White button mushrooms can be substituted.  They won't be quite as pretty, but they are much cheaper.