Showing posts from February 6, 2011
Show all

This is the second of a two-part series on foods eaten by Claude Monet.   Today will be one of the items served at teatime in the Monet home.

Tea was served in the afternoon under the lime trees, on the balcony or near the pond.  Items served included scones, chestnut cookies, madeleines (a cookie-cake baked in a special mold) and cinnamon toast.

Cinnamon toast?  Yup.  This very simple food that nowadays is eaten only by children used to be served at teatime to Monet's very grown-up guests, who included very famous painters of the time.

The original recipe doesn't mention it, but to make them a little more fancy-schmancy, I removed the crusts and cut each slice into 4 triangles.  I also changed the baking time to allow for variance in oven temperatures. Especially mine.  The original stated 10 minutes.  My batch started to burn after only 5. 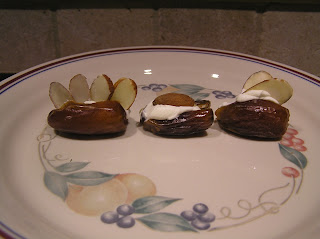 Due to millions ... I mean hundreds ... okay, two Faithful Readers asked to see photos of my easy Stuffed Dates recipe posted earlier.  Please revisit the post to see the update.  If you thought the description was mouth-watering, wait 'til you see how they're made.  No, I mean, don't wait, go there now.  Pleeeeeeze ... *making doe eyes*
1 comment
Continue reading >> 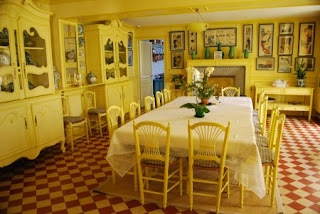 Today and tomorrow will be another set of cross-over postings with Art Round Table.  If you visit Rocco's site, you (hopefully) will see my post about the great impressionist artist Claude Monet.  Unlike most artists, he was appreciated during his lifetime and was able to indulge his own appreciation towards food, keeping a detailed journal of meals and recipes prepared by his cook.

This kind of stuff is exciting to me (yes, I am that boring, so sue me...).  I totally dislike books that claim to contain recipes for dishes a famous artist ate, but then when you open the book, you find the disclaimer of, "these are recipes (famous artist) MIGHT have eaten."  I found a book in the library about Van Gogh that contains actual recipes from a restaurant he actually frequented, but the first paragraph of each chapter admits Van Gogh pretty much subsisted on bread and coffee (in his madness he believed that he painted better when he was starving).