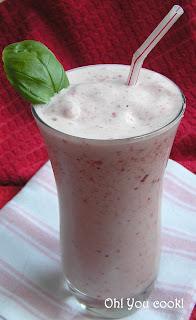 This is the last in my mini-series of strawberry recipes, mostly because I finally used up the strawberries in the making of this cool drink.

Way way back in my undergrad days, I lived semi on campus at downtown NYU. I say semi, because there wasn't really a downtown NYU campus. The school back then only took up only a small part of The Village, and hadn't yet tried to swallow downtown whole. My dorm was a block from the closest thing to a quad --Washington Square Park.


And a couple blocks away was an Orange Julius. In case one isn't near you, Orange Julius is a smoothie type of joint similar to Jamba Juice. I haven't been to one pretty much since my ol' college days and was surprised that it is still in existence. I still remember the signature drink I had there at least twice a week after classes -- the Strawberry Julius. Of course.

At the time, I didn't know exactly what went into a Strawberry Julius. The franchise didn't have a web presence o…
4 comments
Continue reading >> 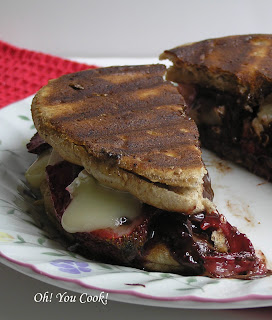 Today's post is a fun one.  As part of the Crazy Cooking Challenge this month, members have to find a grilled cheese recipe from another blog, then make that recipe and post about it.  The standard ol' grilled cheese sandwich, made with American cheese and white bread, would be quite boring, so I did a little (and by a little I mean a lot) intertube surfing to find something new!  Exciting!  Different!

Plus it had to have strawberries in it.  Not because of the challenge, but because the sale at the Try-n-Save on strawberries is  still going strong (check out what I made last week).  I also had the big idea of using goat cheese, because I had an untouched package left over from Passover that I picked up at Costco of all places, and still hadn't yet figured out what to do with it.


Eventually I landed upon Jessica's blog how Sweet it is.  Jessica had posted a lot of delicious-looking recipes, many of which I will have to make sometime in the future.  But for now, her Ro…
14 comments
Continue reading >>
More posts