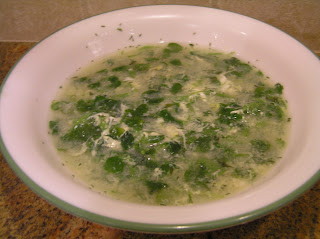 This is the second of two posts about a couple of foods Georgia O'Keeffe enjoyed.  It's not up yet, but as soon as I see my article about the great painter on Art Round Table you'll be the second to know.

Watercress Soup is a simple soup to prepare, yet tastes like you spent hours slaving over a hot stove.

Watercress is a "semi-aquatic" (hence the name) green with a spicy taste.  But it seems to lose its spiciness when cooked, so if watercress hasn't appealed to you in the past, give it one more chance.

According to that great wealth of medical knowledge, Wikipedia, watercress contains significant amounts of iron, calcium and folic acid, in addition to vitamins A and C and antioxidants. There are also claims that it defends against lung and breast cancers.  O'Keeffe lived to 98, so you do the math.

Unlike other how-to-add-cold-eggs-into-hot-ingredients recipes (such as chocolate pudding), where you first temper the eggs by slowly mixing them with a bit…
1 comment
Continue reading >> 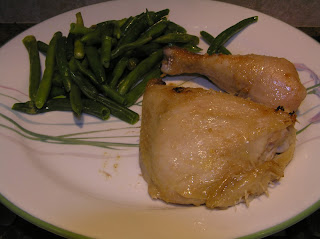 Today and tomorrow I will be doing cross-over postings.  If I am lucky, my short (and by short I mean minuscule) article about the painter Georgia O'Keeffe will appear in today's Art Round Table.  A food-related article, of course, because I'm a better judge of eats than I am of arts.

But since recipes really belong in a food blog, my take on a couple of dishes O'Keeffe enjoyed, thanks to a book written by one of her caretakers, will be posted here.

Today's recipe is a simple baked chicken with lemon.  The original calls for a whole chicken, which I inconveniently did not have on hand.  Also, the original uses 2 lemons, one for inside the bird and one for outside. Because I used parts, all of the inside was outside, so only 1 lemon was necessary.  If you make the original, you'll need both. 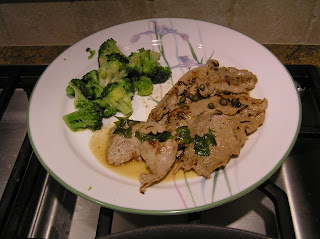 Kosher veal scallopini cutlets at the Try 'n Save were on sale this week -- instead of obscenely priced, it was merely outrageous.  Such a bargain!  I picked up 3 packages, enough to treat the family.  And by family, I mean ME.

By the time I returned home, much lighter in the wallet, I had decided that a simple wine-lemon-caper sauce would work mah-velously.  Plus it would use up more of the leftover out-of-focus wine, all of the leftover lemon half and some of an opened bottle of capers that were all taking up space in the fridge.

White wine sauce is similar to what I earlier posted for rainbow trout.  But when used on veal, it becomes piccata.  What's the difference?  In restaurant terms, about 10 bucks. *rim-shot* 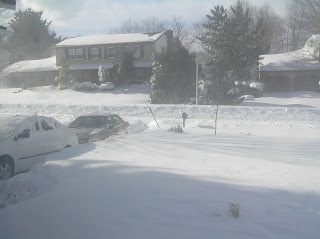 Here we are, socked in by a couple of feet of blizzard.   Hey, kiddies!  I know there's no school, but everything's a learning experience. Here is a relevant math lesson:

Since I burned off a bazillion calories this morning taking Cujo for his morning drag me all over the street into the snowdrifts walk, I allowed myself the luxury of including an egg in the pudding.  If you  prefer, leave it out.  The pudding will still be wonderful, but not as silky perfect.

Beat egg lightly in a medium-sized bowl.  Set aside. 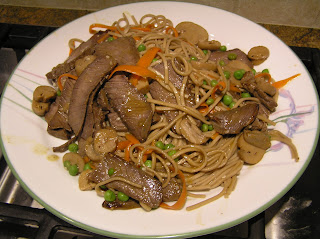 With two teens still living at home, there are usually no leftovers unless I cook in bulk.  I was rummaging around the freezer early one morning for something to defrost to make later on in the week, when I found a package of leftover steak.  Only 1 1/2 steaks in the package, since I probably figured that some day there would be another lonely leftover steak or two that could join it in dinner-tude.

Except this time I had a (very) unusual great idea!  If the 1 1/2 steaks were thinly sliced and added to pasta, then they would magically become 4 servings!

Thought I would attempt to wing it this time, rather than use a recipe.  Despite this obvious handicap, it was quite yummy!

Shred, rather than chop the carrot.  You have it out anyway to peel the carrot.  Plus it only added another minute to the prep, and saved several minutes of cooking.  Negative minutes rule!

Feel free to use whatever veggie(s) you happen to have on hand.  Snow peas would be a great addition.