Showing posts from November 7, 2010
Show all 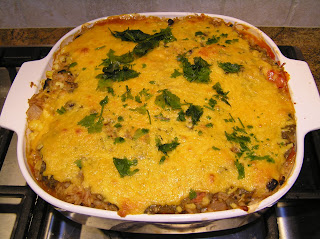 I want to hateThe Pioneer Woman.  I really do.  She cooks massive quantities of food for her family of six on a working cattle ranch, yet is svelte and gorgeous.  She has a wildly successful cooking site and blog.  She even has a cookbook and another book on the way (no fair, mommy, she has TWO cookbooks published and I don't have any ... waaaaah!).

But I can't hate PW.  I just looooove her high-calorie butter-laden recipes!  And I loooove her writing!  I want to write just like her if I ever grow up.

PW's sites are so good that she doesn't even have to come up with original recipes anymore because zillions of people are able to post THEIR recipes on HER site (she creates recipes, anyway.  But she really doesn't have to.  But I love that she does.   By the way, those recipes that zillions of people post are not bad either.  One of those zillions of people include Father Ryan.  I don't know much more about him than his name and that his recipe for Mexican Lasagn…
4 comments
Continue reading >>
More posts