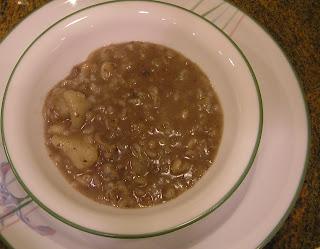 Another in an irregular series of comfort food recipes.  I mentioned the history of this soup/meal over a year ago, but never got around to posting the Real Thing.   One thing I forgot to mention back then was that a couple of potatoes were also thrown in, so this soup is a mucho carbo-load.   Don't plan on feeling hungry again for a few days.

Because I thought there was "something" missing in the taste, I brought some of the soup's flanken to work the other day and forced asked a few people taste.  Most said it was okay or good.  But one astute co-worker suggested adding a bay leaf.

... decided she was absolutely right!   Thanks, Pat!  I owe you one.  The recipe below has been corrected.

The soup is rather thin at the end of cooking time.  It will thicken up when refrigerated and taste much better if reheated and served the next day.   You can also wait and serve the flanken the next day as well, but it's really hard to wait tha…
Post a Comment
Continue reading >>
More posts